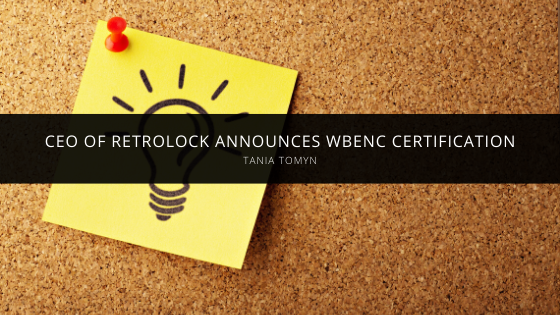 Retrolock Corporation CEO Tania Tomyn announced this week her company is now certified as a Women Business Enterprise by the Women’s Business Enterprise National Council (WBENC). The certification is an honor and a privilege, Tania Tomyn said. The WBENC is “the largest certifier of women-owned businesses in the U.S. and a leading advocate for women business owners and entrepreneurs,” per the organization website. Retrolock Corporation is a women-owned and operated business headquartered in Orange, Calif., with offices in Walnut Creek, CA., and Henderson, Nevada. The company specializes in design-build and interior finish packages including doors, frames, and hardware, finish carpentry and millwork. Tania Tomyn and her team are known for delivering exceptional service and value by partnering with architects and general contractors to design-assist but still reach the design intent while staying within the client’s budget. to create superior products at budget-friendly prices. Retrolock specializes in markets for multifamily housing, sports and entertainment venues, higher education, behavioral facilities, hospitals, and high-end hospitality.

The certification is an honor, to say the least. According to the website, WBENC certification is accepted by more than 1,000 corporations and representing some of the nation’s most prestigious brands, in addition to several states, cities, and other entities. WBENC is also an approved Third Party Certifier to the United States Small Business Administration (SBA) Women-Owned Small Business (WOSB) Federal Contracting Program, per the website.

Retrolock, already certified as a WBE / CBE by L.A. County, is proud to receive the WBENC certification. CEO Tania Tomyn is looking forward to the networking and educational opportunities certification provides for the growing company.

Tamia Tomyn and, Retrolock President Aaron Wesley Smith formally of Michigan, are well-known locally and abroad for their philanthropy and animal and human rights advocacy, as well as their business acumen. Tania Tomyn advocates for the rights of men, women, and children who are survivors of abuse, with a particular focus on helping residents of the island of St. Croix in the U.S. Virgin Islands with CCSC (Women’s Coalition of St. Croix). She and her company also routinely donate to efforts including The VVA (Vietnam Veterans of America) Veterans Initiative of Canines for Independence and The Guardsmen.