The holidays are just around the corner and few things embody Christmas spirit like a well-adorned tree. The Guardsmen, a San Francisco non-profit, uses this unmistakable symbol of holiday cheer for a twofold purpose. In addition to selling trees that will beautify Bay Area homes and businesses, the group uses the proceeds to benefit tens of thousands of at-risk kids. This year, like many before, Tania Tomyn and Aaron Wesley Smith, CEO, and President of RetroLock Corporation, respectively, have donated generously to the cause.

RetroLock Corporation is one of the area’s most successful construction companies, a woman-owned and operated business headquartered in Orange, CA. Aaron Smith and Tania Tomyn and their talented team specialize in design-build and interior finish packages, including superior doors, frames, hardware, carpentry, and millwork. With offices in Orange, Concord, and Las Vegas, Nevada, RetroLock Corporation is praised for its commitment to exceptional design quality and value. 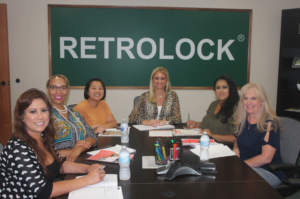 But the company is not only respected for its impressive portfolio and gold-star reputation for beautiful and functional multifamily housing, sports and entertainment venues, higher education, behavioral facilities, hospitals, and high-end hospitality establishments. Aaron Smith and Tania Tomyn are also well-known for their commitment to giving back via causes including animal rescue and welfare, domestic violence prevention, protection, and rehabilitation and underprivileged youth empowerment.

This year, the RetroLock (RLC) Northern California’s office donated to The Guardsmen and Tree Lot. As a result of the company’s generous donation and other community donors, The Guardsmen will be able to give kids the opportunity to attend summer camps, after-school programs, and private schools.

“Members of The Guardsmen believe that the many opportunities afforded them in achieving personal success are directly related to the broad range of positive experiences they were fortunate to have growing up,” says the organization website. “The Guardsmen mission is to provide underprivileged youth in the Bay Area opportunities throughout their childhood to have positive life experiences outside the often-harsh realities of their daily lives.”

Since 1947, The Guardsmen has run The Tree Lot, staffed entirely by volunteers. To date, tens of thousands of young people have benefited from this annual fundraising endeavor and the charitable donations of companies like RetroLock and caring individuals like Aaron Wesley Smith and Tonia Tomyn.